Our three EMD F-units had reached the end of their useful lives and would need a complete "from the ground up" rebuilding as well as the addition of another A unit so they could operate in both directions. The estimated cost by an outside rebuilder would be approximately $250,000 - $300,000. ORHS opted to sell the F-Units to Ohio Central Rail Systems (now Genesee & Wyoming).

On April 28, 2000, engine 471 was acquired by ORHS in a three-way deal between Helms Financial Corp., Ohio Central Rail Systems and ORHS. After months of negotiations, the locomotive was sold to ORHS at a price of $112,000, considerably below its initial asking price of $150,000. The 471 was repainted and put into full compliance with Federal Railroad Administration rules at Ohio Central's Morgan Run Shops at Coshocton, Ohio and delivered to Orrville on May 5, 2000.

The 471 was built by the Electro-Motive Division of General Motors in 1950 as a 1,500 HP, GP7 model and delivered to the Maine Central Railroad (MEC) as their number 571. It was equipped with a steam generator to heat passenger cars and was used in both freight and passenger service. In December of 1985, MEC rebuilt the engine at their Waterville, Maine shops with an upgraded "crew cab" and dynamic brakes. The high forward hood was also lowered for better visibility from the cab and the number was changed to 471.

It was later repainted in Guilford Transportation colors after the MEC, Boston & Maine, and Delaware & Hudson were merged.

In May of 1990, the Connecticut Department of Transportation purchased the locomotive from Guilford and began operating it on the Shoreline commuter line out of New Haven with the locomotive repainted into the former New York, New Haven & Hartford Railroad "McGinnis" paint scheme.

The locomotive was totally rebuilt and upgraded again by Amtrak in 1994 with a more powerful 2,000 HP 645E engine replacing the original 567B, updated electrical systems, improved controls, cab signals and various mechanical upgrades. 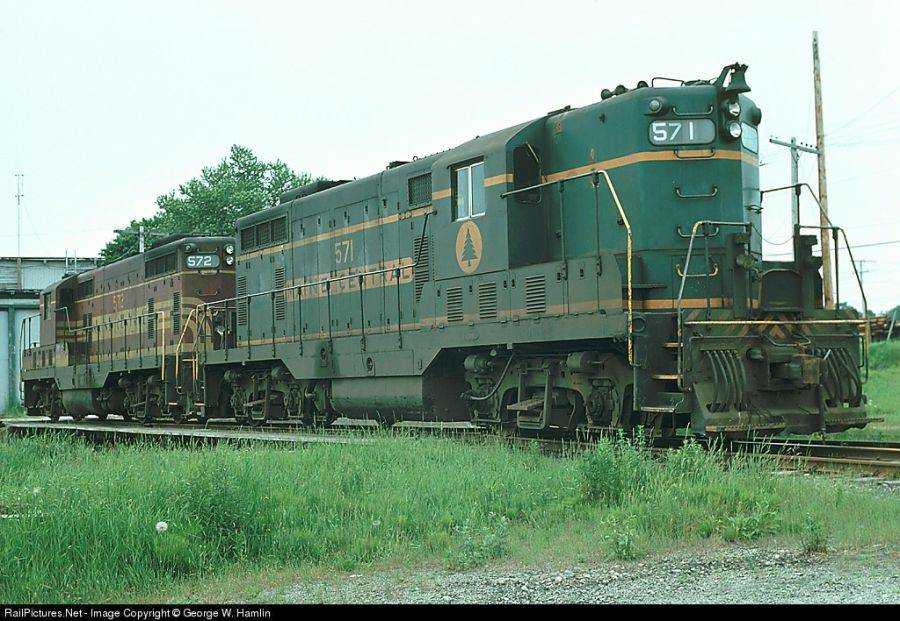 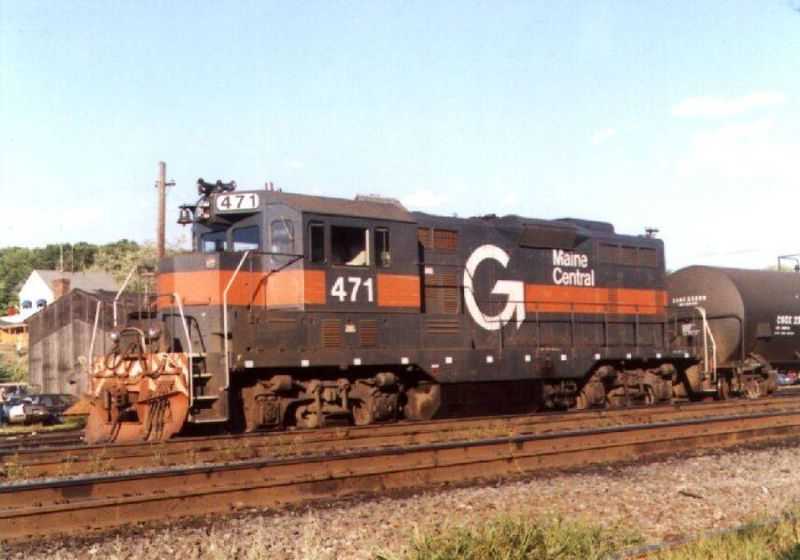 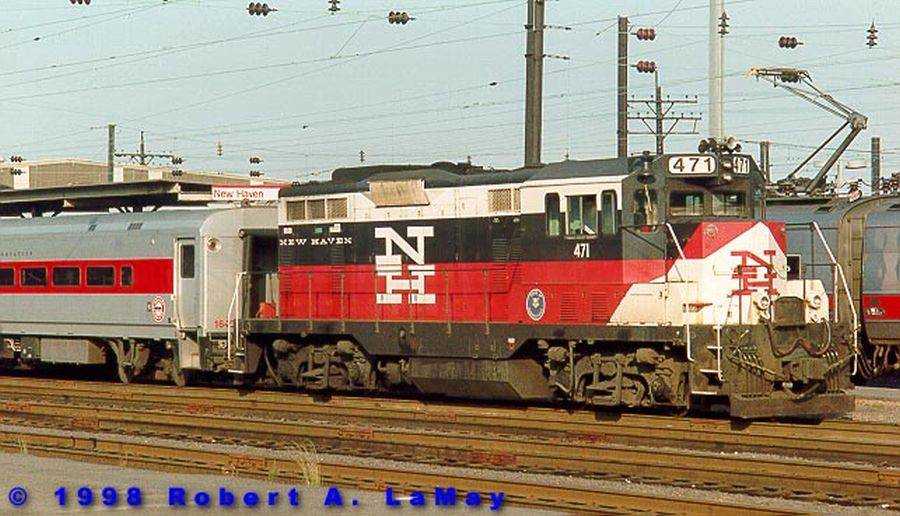 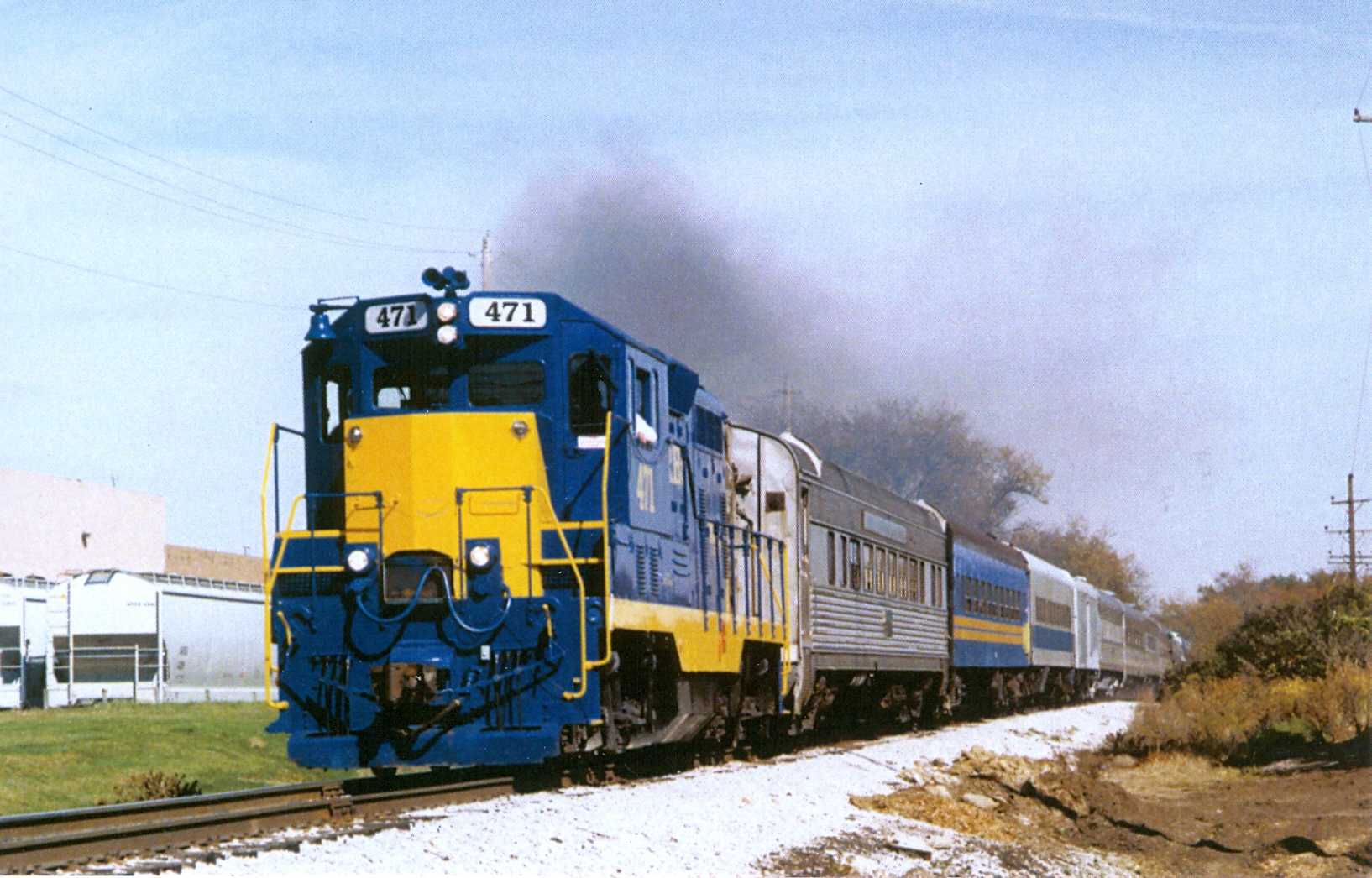 This 1,000 HP locomotive was built in February, 1943 for the United States Army Transportation Corp. as #8050, specification number E1645 for use in Iran during World War II on light rail and in areas where water for steam locomotives was difficult to source. Its primary use was on the Trans-Iranian Railway running supplies to the Russian army. Its serial number is 70671. It is essentially an RS1 but with six powered axles instead of four. The generator and electrical equipment are the same as the RS1, hence poor high speed performance. It returned to States in June, 1945. 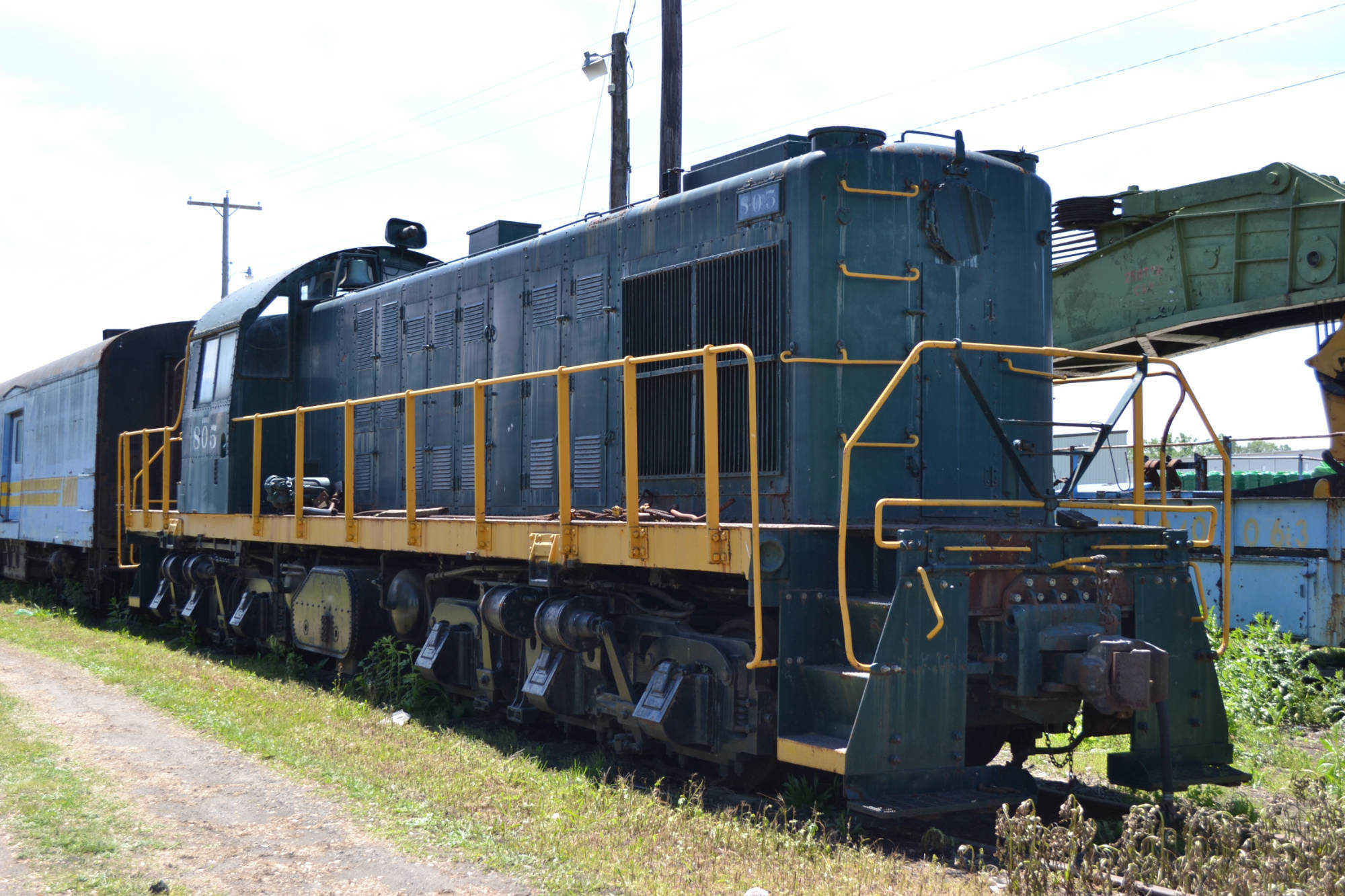 #8050 was reassigned to the US Air Force at Loring Air Force base near Limestone, ME where it interchanged in and outbound shipments with the Bangor & Aroostook Railroad. It could sometimes be seen in Waterville, ME being serviced by the Maine Central Railroad locomotive shop.

Not a lot of this unit’s history is known at this time though research is ongoing. We believe it was built in the 1930’s by the Fate-Root-Heath Company in their Plymouth, Ohio locomotive factory as an 8-ton, model DLB2. DL is the locomotive model designation, the “B” is for a Buda gasoline engine and the “2” is for a low profile “quarry” cab. Its original purchaser is currently unknown and its history from the date of manufacture until the 1970’s is still a mystery. Rumor has it that it spent some time in Cleveland at a barrel factory and at Collinwood, Ohio at a passenger railcar facility in the 1970’s through the 1980’s.

Sometime during its long life, it received a Detroit 371 diesel engine with 113 horsepower, a torque converter, air brakes, a new taller cab, new radiator mount and various other improvements. It retains its original 4-speed mechanical friction drive transmission with chains driving the axles. 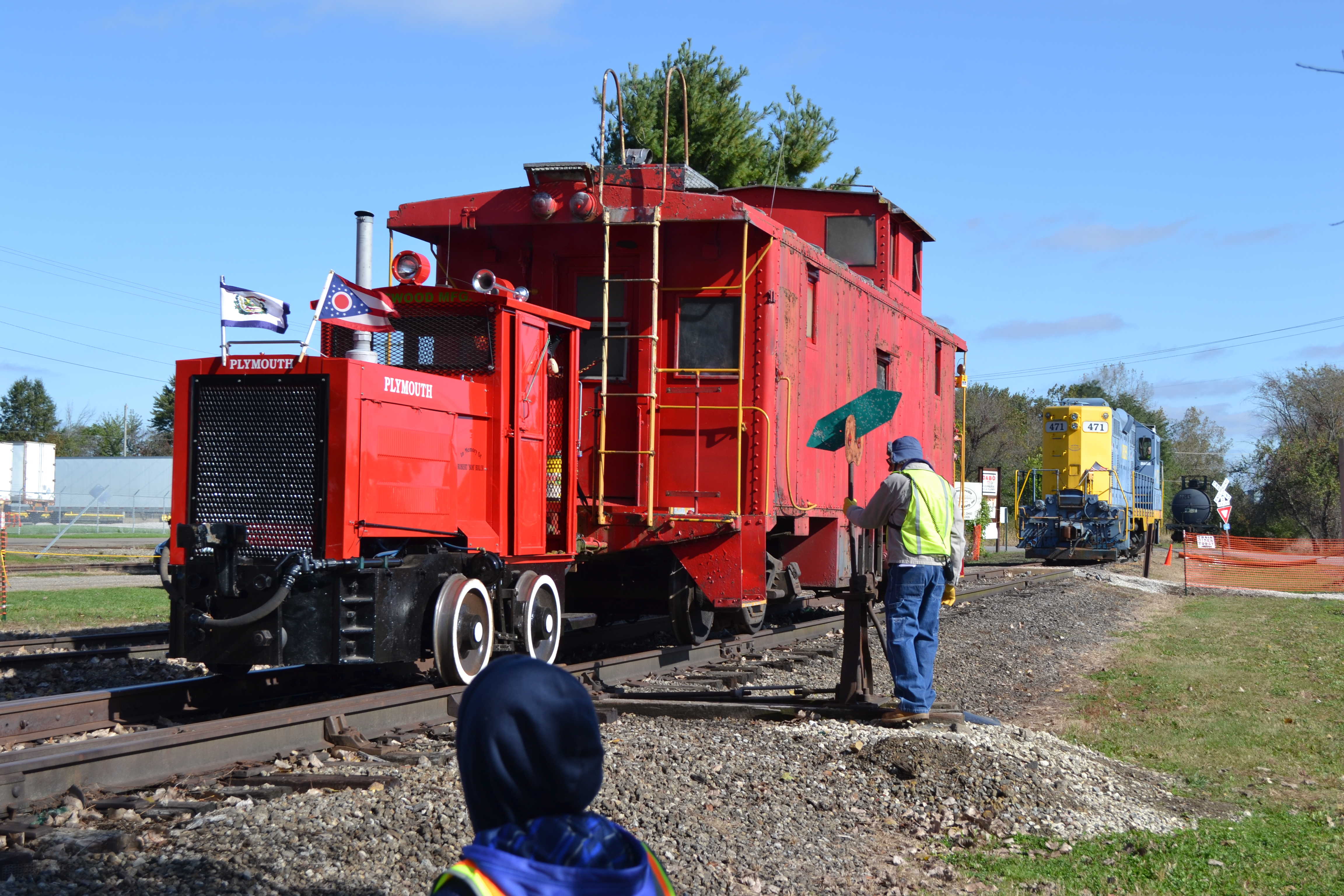 Sometime during its long life, it received a Detroit 371 diesel engine with 113 horsepower, a torque converter, air brakes, a new taller cab, new radiator mount and various other improvements. It retains its original 4-speed mechanical friction drive transmission with chains driving the axles. 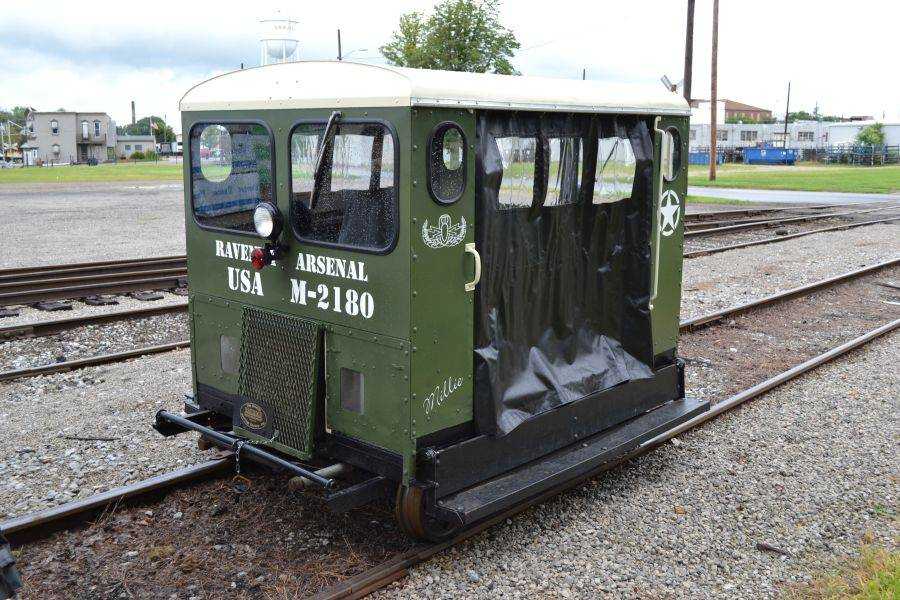 It was one of a group of motor cars acquired from the contractor decommissioning the base in the early '80s. After restoration by several members, ORHS acquired the car in 2008 and it has been an integral feature at our trackside events ever since.

The M-2180 also pulls trailers for hauling track tools, supplies, weed spraying equipment and anything else necessary to maintain our track. 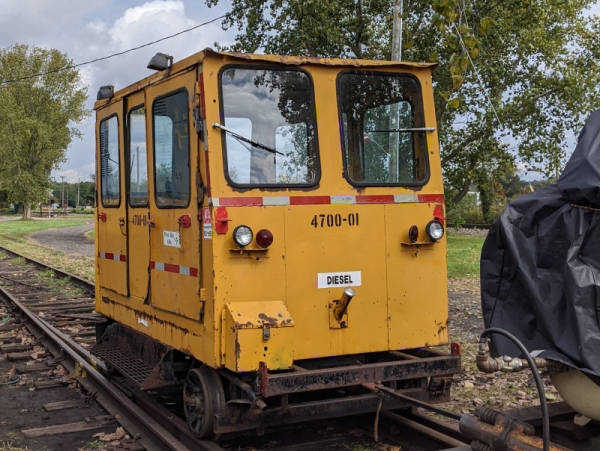 This is what we believe to be a '70s vintage MTM200 diesel and hydrostatic drive motorcar built by Modern Track Machinery. Of interest, forward and reverse is controlled by a joystick. A bit of brake and fuel line work has restored the unit to operation. Our track crew is especially appreciative of this motorcar when the weather gets colder as it is our only fully enclosed motorcar with a heater.

ORHS has two other A4 motor cars currently in use in maintenence of way or just to quickly get from one end of the line to the other. All are originally from Canadian National, numbers 193-39 "Dilly"and 3700-32 "Willy". Our plans are to refurbish them so they will also be available for giving rides during our operating events. 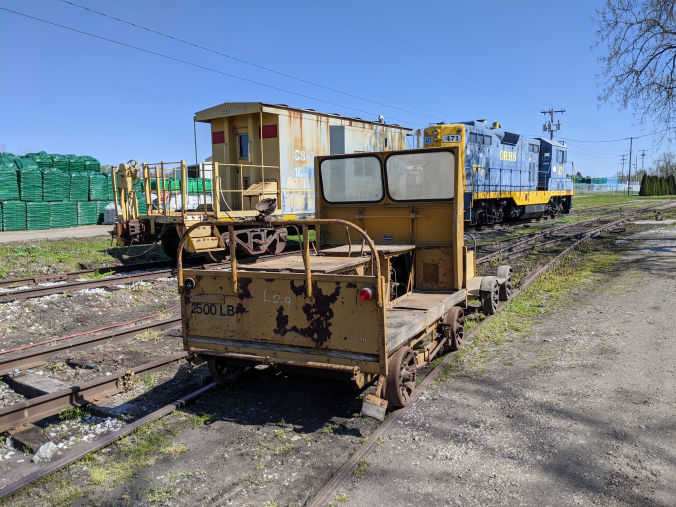 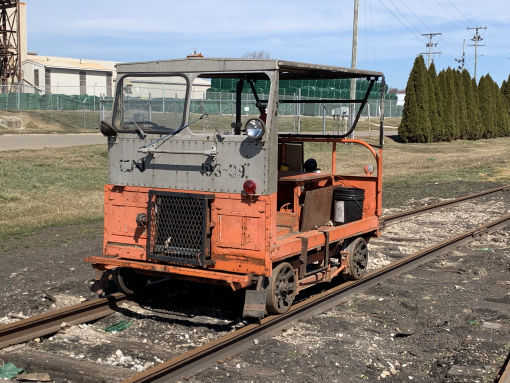 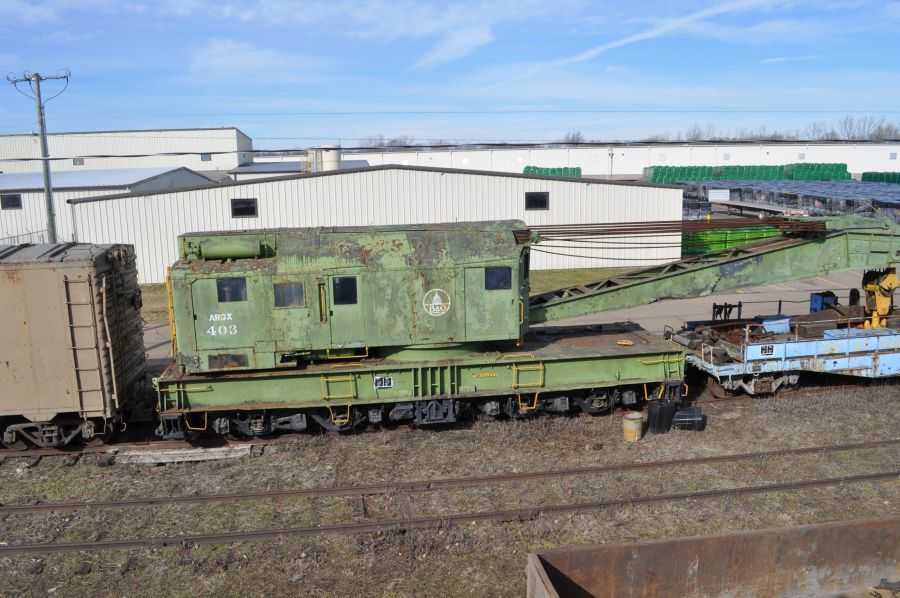 #403 was built by Industrial Brownhoist, Construction Number 12064, in August 1952 for the Baltimore & Ohio Railroad as number X-216. It's powered by two Cummins HB600 diesel engines. It was originally based out of New Castle, PA until 1968 when it was reassigned to Willard, OH. The X-216 was renumbered to 940500 in 1982 and retained that number after the formation of CSX in 1989. Art Davis acquired the wrecker after it was retired by CSX in 1992. ORHS assumed ownership after the acquisition of DABO, Inc., Art's company.

If it looks a little familiar, X-216 is the sister to the X-215 at the Baltimore & Ohio Railroad Museum in Baltimore, MD.

#403 is currently under restoration and will be returned to service, eventually as B&O X-216, for demonstration purposes and for our use in the rail yard. 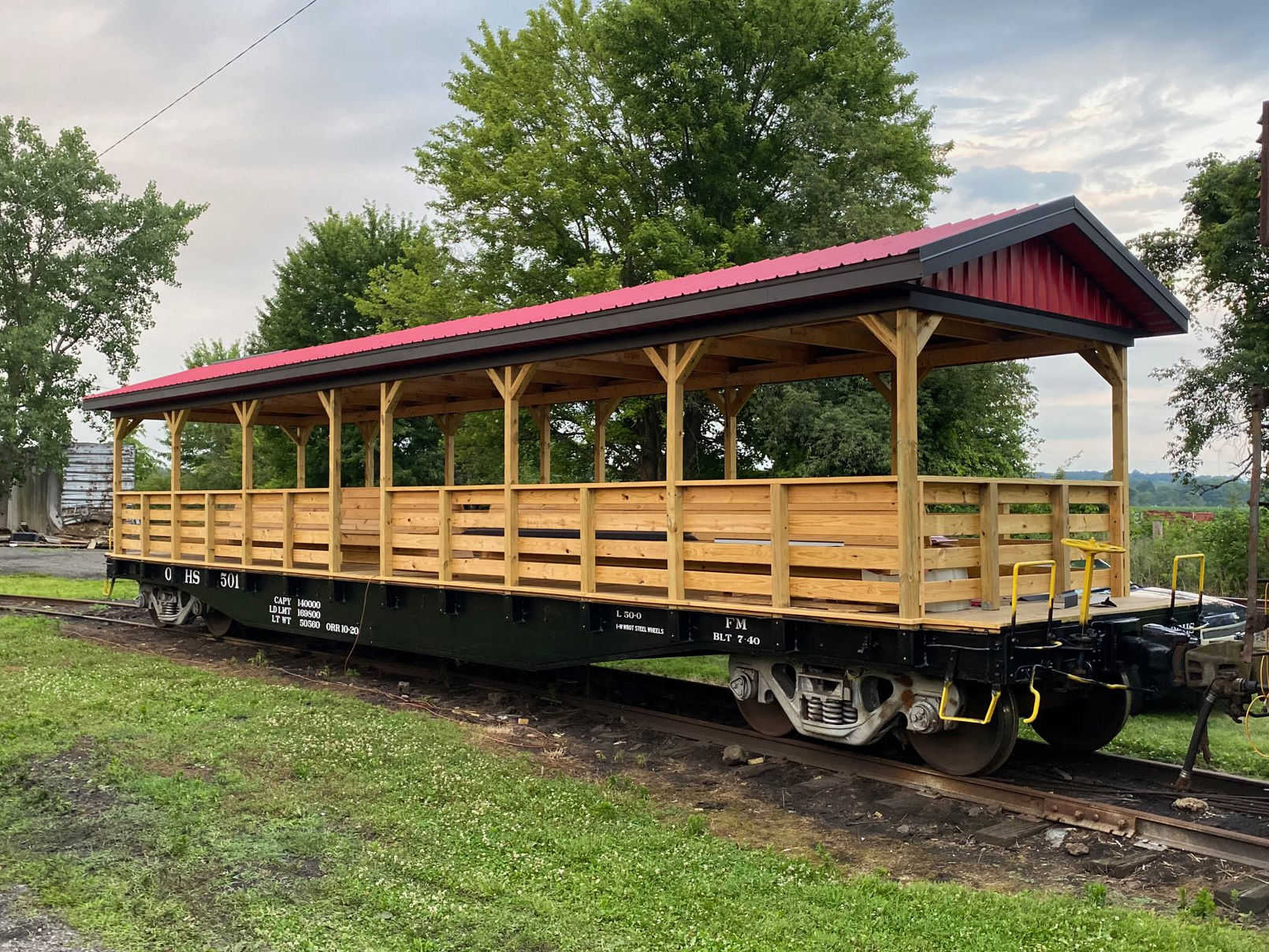 The previous life of this car was as CSX #940062, a 50' crane boom idler car used in wreck train service. The conversion was completed in the summer of 2021. Thanks to the Wayne County Community Foundation who awarded a grant for this project and to all who donated to this project. 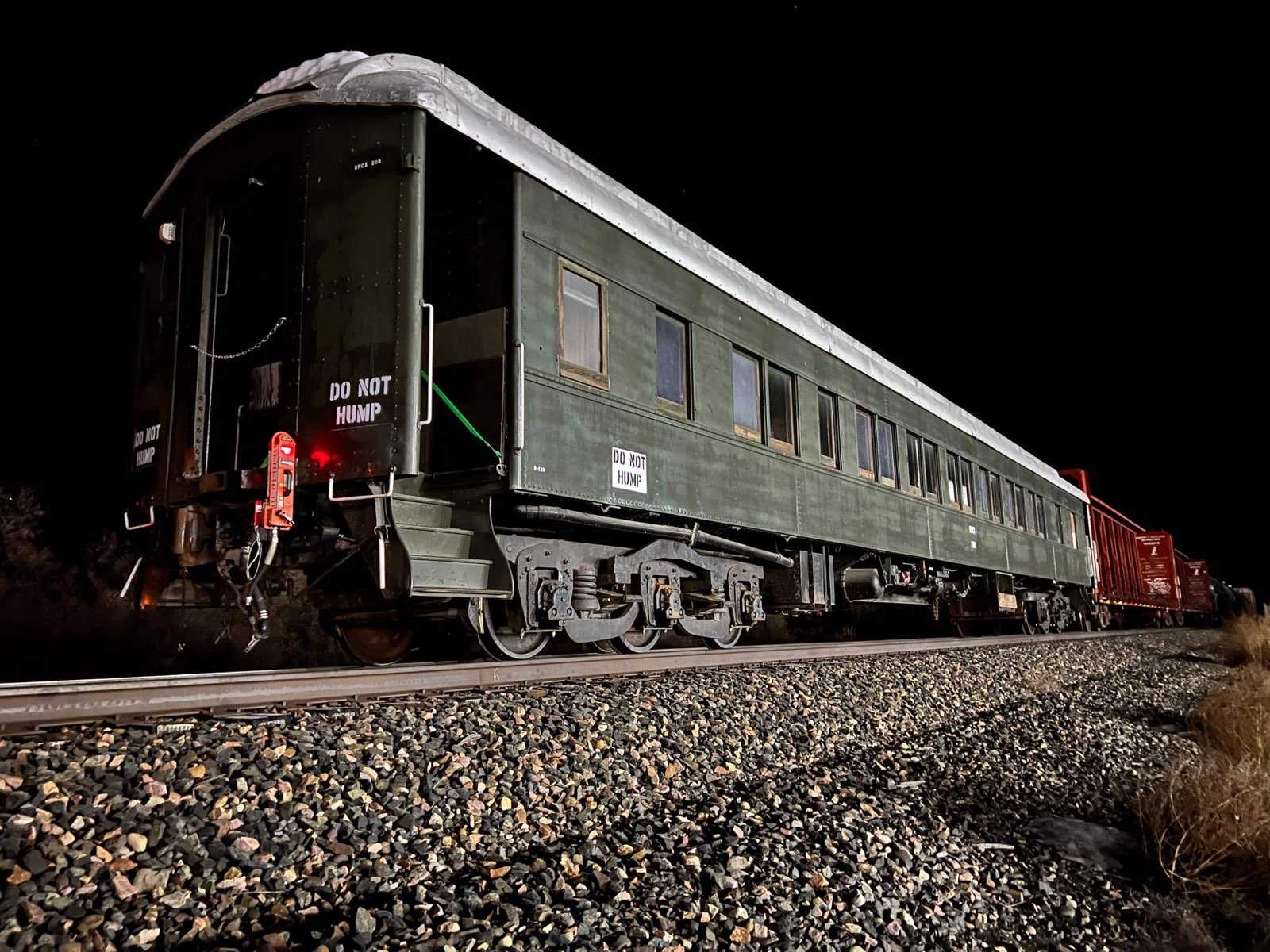 Coach #208 was built by Pullman in 1920, originally as a 12 section, 1 drawing room sleeper named "Phanton" on the Atcheson, Topeka & Santa Fe Railway. The car was downgraded to a tourist sleeper, #1620, in 1941 as newer cars were purchased. The car was sold to the Chicago, Burlington & Quincy in 1947 and used as a back-up sleeper in Great Northern colors (Great Northern & Northern Pacific jointly owned CB&Q). In December of 1952, the car was pulled from passenger service and used in maintenance of way service as #251150. The number was again changed to #968405 in 1981 by Burlington Northern, the successor to the merger of CB&Q, GN and NP. #968405 was sold at unknown date to the North Pend Oreille Valley Lions Club for their passenger operation on the Pend Oreille Valley Railroad and was modified to a 64 seat coach as POVA #208 "Eagle". The POVA passenger operation was later taken over by the Rotary Club and passenger operations ended in 2016. The car was subsequently sold to a private party in 2022 and registered as RPCX #208. It is now is part of the ORHS operating fleet. 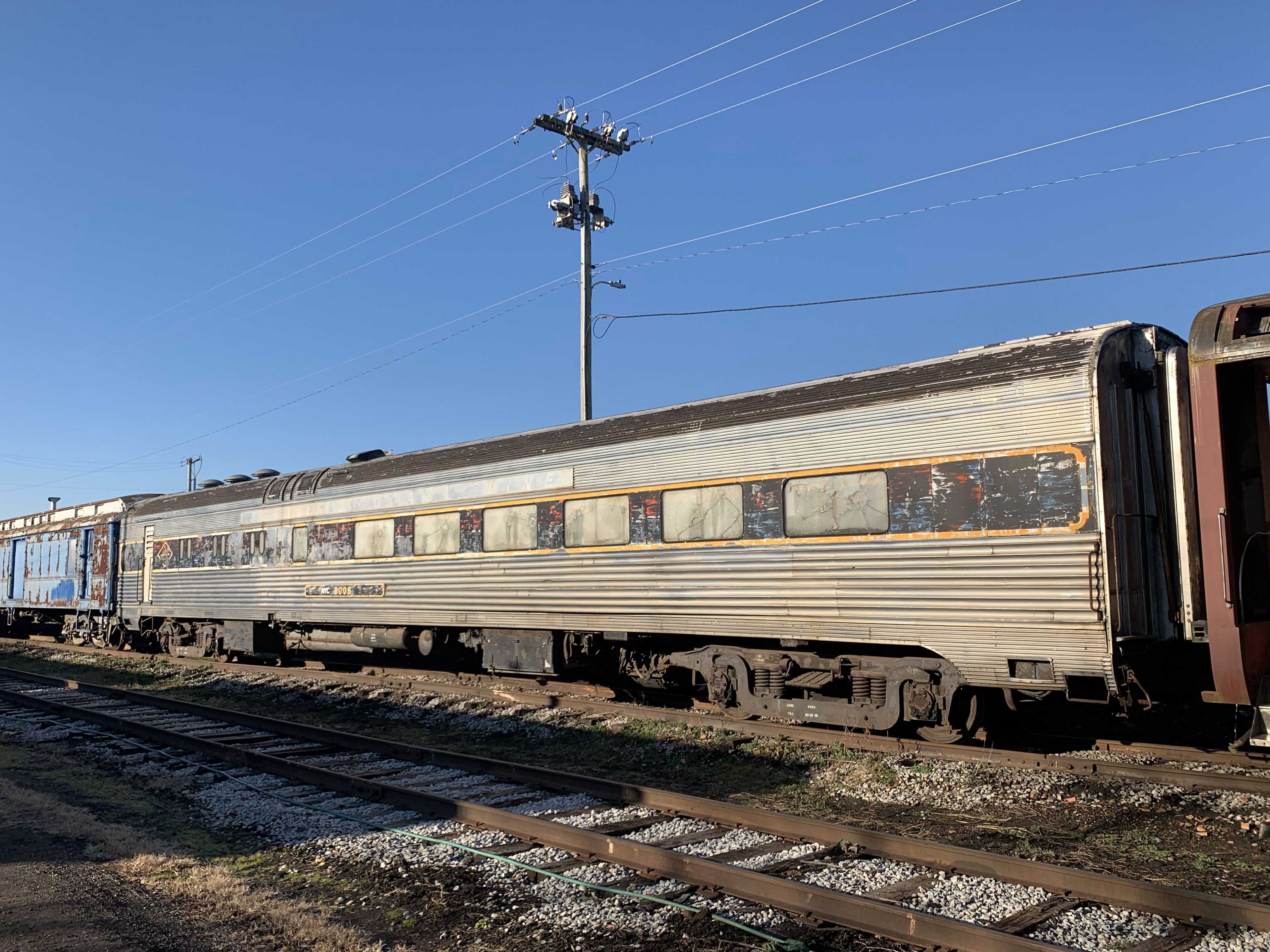 The 8008 was built by the Budd Company in 1939 for the Atlantic Coast Line Railroad, part of lot 96809. This car was used in ACL's Champion service as a 48 seat diner and was originally named "Baltimore" with no number. It was assigned number 5908 upon the merger with the Seaboard Air Line Railroad to form Seaboard Coast Line. The car was transferred to Amtrak in 1971 and renumbered 8008. ORHS acquired the car from Rails Diversified, Inc. in 1986.

The 8008 is currently not in service and is being evaluated for restoration.

UPDATE: We are currently seeking donations, time and materials to put this car back into service! Click here for more information. 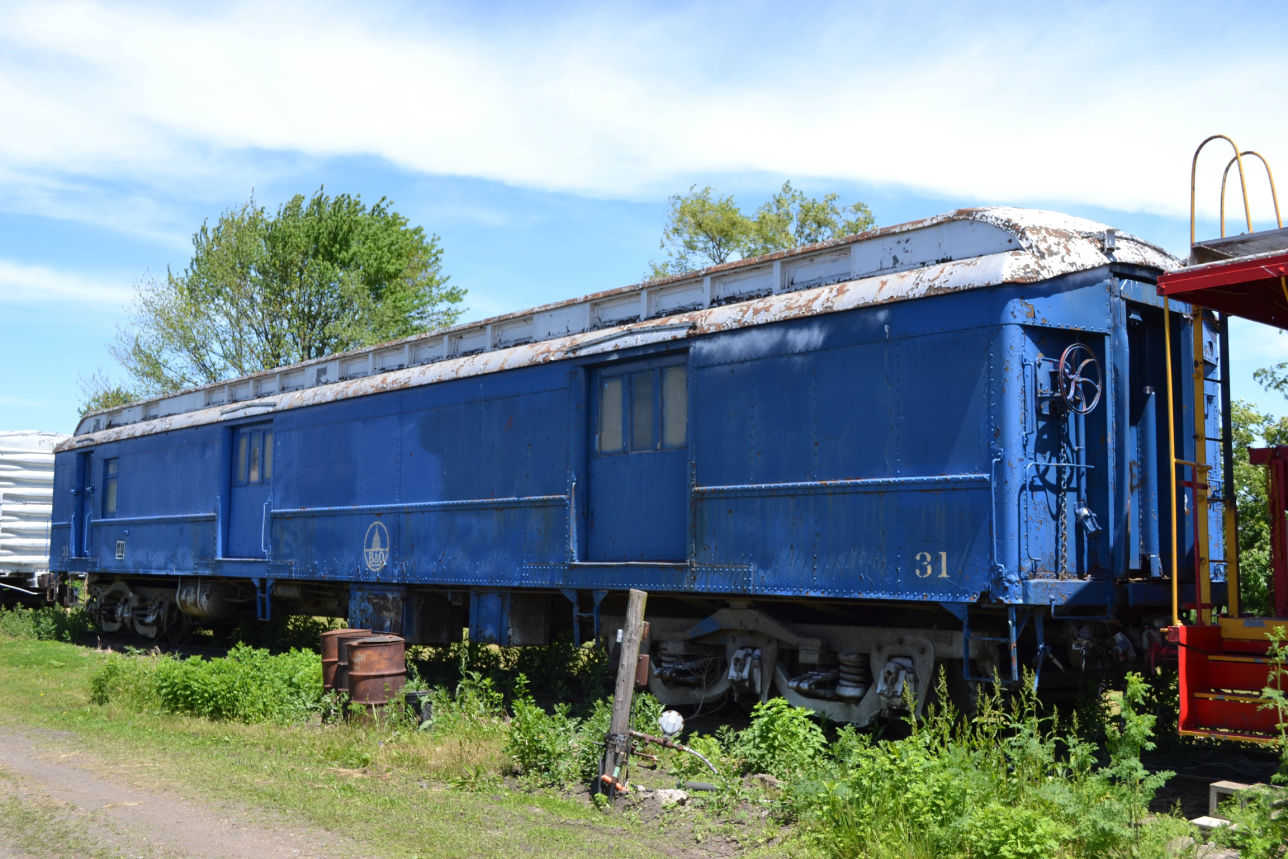 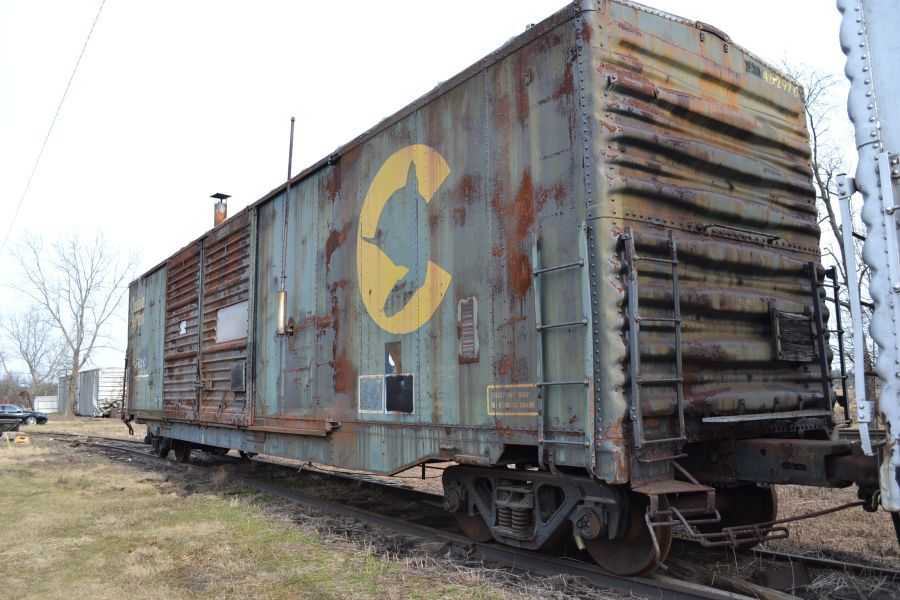 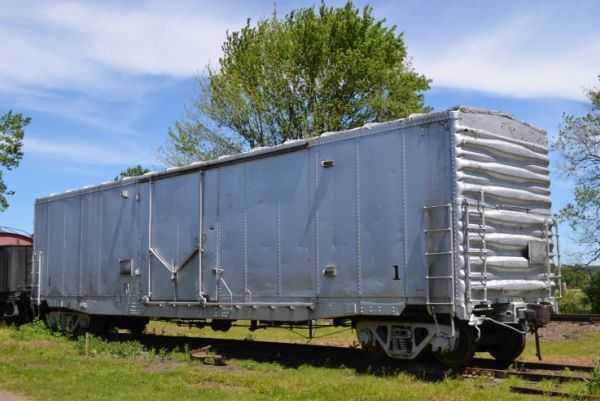 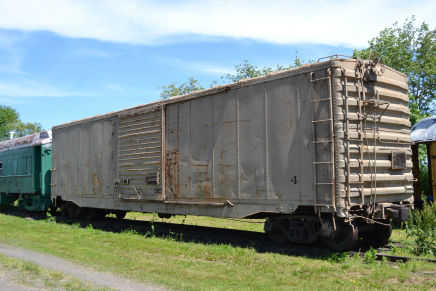 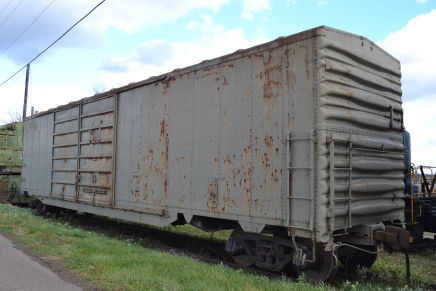 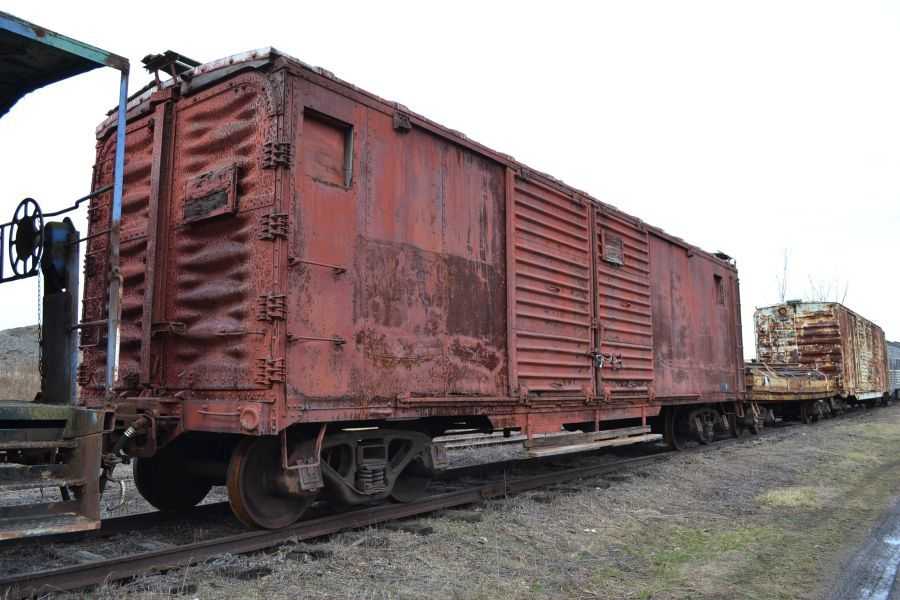 #9595 was built in 1929 for the Chesapeake & Ohio Railway to haul automobiles. It has hinged doors on one end of the car to help facilitate loading.

This car is currently used for materials storage. 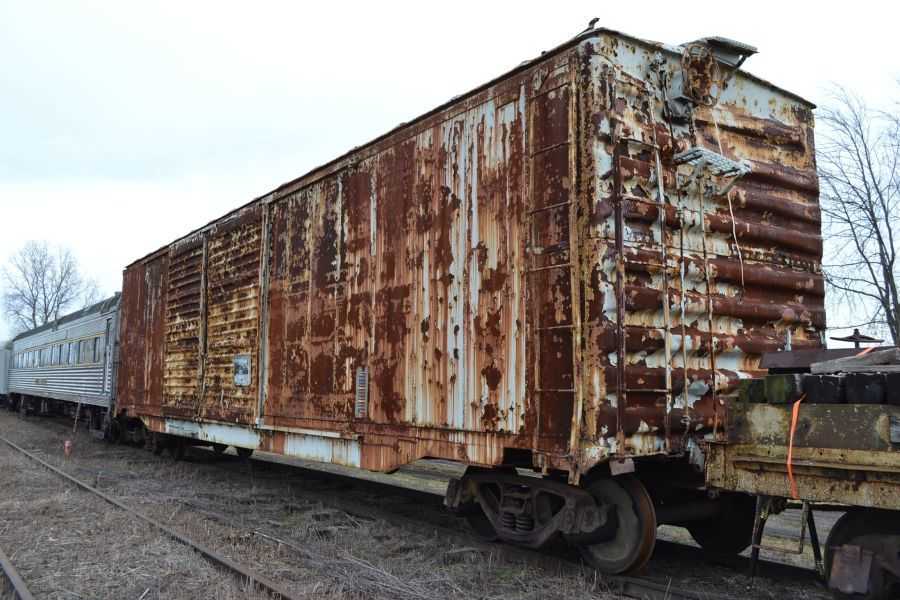 This is an ex-New York Central boxcar and may be an ex-auto parts car. The bolster appears to be marked for NYC 52335 but that may not be correct. The car has been modified with a rollup door in one end for storage. 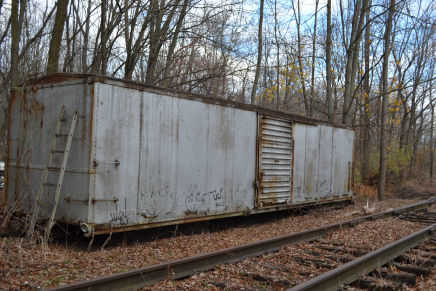 "Boxcar in the Woods"

"Boxcar in the Woods"

40' single door boxcar. This is possibly a Pennsylvania Railroad class X-29 car. The number is unknown. This car is on the ground without trucks at Hugo Junction and is used for storage. 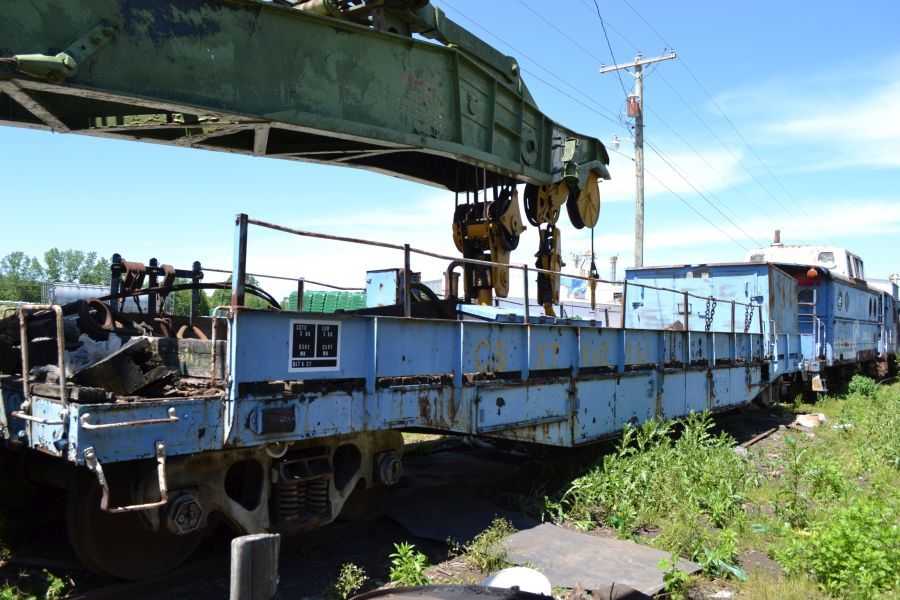 #940063 is a 50' flat car from CSX. It was originally built for the Chesapeake & Ohio in 1927 as #W-88, a crane boom idler car. This type of car would be used to carry wheelsets, rails, ties, tools, supplies and most anything else needed at derailment sites for rerailing cars as well as providing space for the crane boom in a wreck train consist. 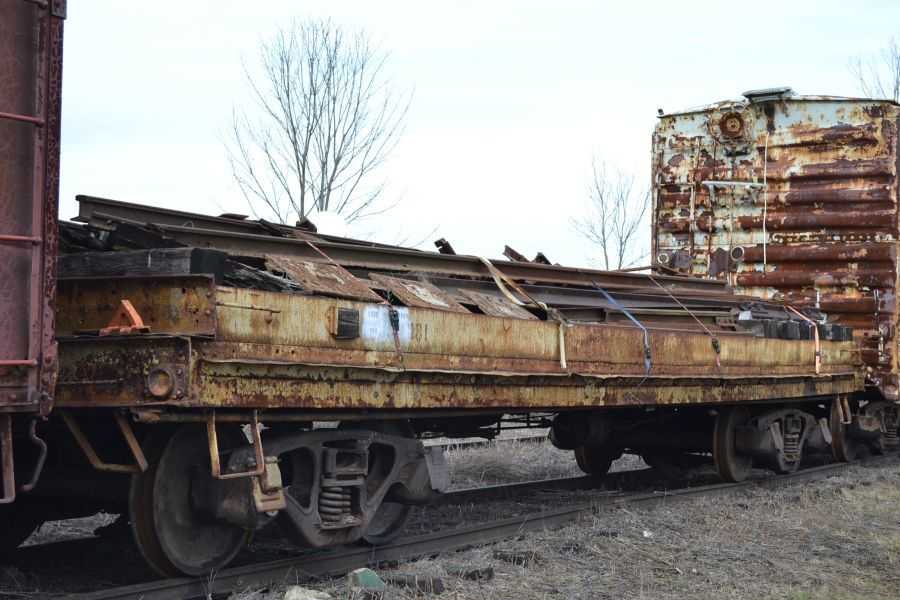 This flat car of unknown origin may have started out life as a 40', 50T boxcar on the original Wheeling & Lake Erie Railway. We use it to move heavy track materials around the yard. 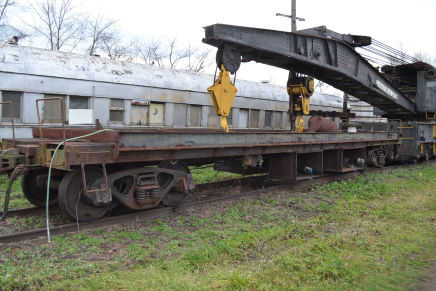 This was outfitted as a crane boom idler, We don't know its history. It is possibly an ex-Delaware, Lackawanna & Western as evidenced by the initials in the truck castings.